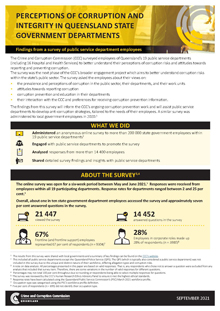 In May-June 2021, the CCC surveyed employees of Queensland’s 19 public service departments (including 16 Hospital and Health Services) about their perceptions of corruption and integrity. They were asked questions about:

Read the full results of the survey.

Public service department employees were asked if they had ever witnessed or suspected a range of behaviours and the extent to which they think the behaviour is corrupt.

Among those respondents who told the CCC that they had, the most common behaviours identified were nepotism/favouritism in recruitment, timesheet fraud and the theft of resources. Respondents agreed that corrupt behaviours also included accepting property in exchange for awarding a contract and people misusing confidential information to benefit themselves.

When asked what they believed to be the greatest corruption risks in their departments, survey respondents identified bullying and harassment (including sexual harassment), absent or inadequate internal systems, recruitment of personnel (including vetting), and absent or unclear policies and procedures.

They also Identified procurement as a vulnerable area, and reported concerns about corruption risks associated with lobbying.

There was a strong preference among those who indicated they would report corruption to disclose to their supervisor or manager, and a high level of agreement that their direct supervisor would be supportive of them if they reported corruption. Overall, however, slightly more respondents identified a preference to report corruption to someone external to their organisation as opposed to someone internal to their organisation.

Respondents stated that the following were barriers to reporting corruption: lack of confidence that they would be protected from reprisal or victimisation, concern about losing their job or experiencing other personal repercussions, or that meaningful action would not be taken.

A small proportion of respondents indicated they would not report corruption because they do not know how to.

Resources to help you make a complaint

If you are considering making a complaint to the CCC about corruption, the following information will show you how providing additional detail can make your complaint more effective.

Note: The names of the people in this video are fictional and are not based on real people or actual complaints. Any resemblance to actual events, people or companies, is entirely coincidental. However the issues presented and discussed in the video are regularly reported to the Crime and Corruption Commission (CCC).

Perceptions of corruption and integrity in Queensland State Government departments

This publication details survey results and views of employees of Queensland’s public service departments on corruption and integrity.

Thinking of reporting corruption? Information about making a complaint

Advice and resources to help you write your complaint.

Public servants share their views on corruption with CCC

More than 14,000 public sector employees have shared their perceptions of corruption and integrity with the CCC.