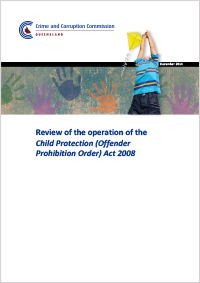 The CCC reviewed how the Child Protection (Offender Prohibition Order) Act 2008 had been used by the police and the courts in its first five years of operation. It identified barriers that are currently inhibiting use of the Act and recommended areas for potential improvement.

The Child Protection (Offender Prohibition Order) Act 2008 (the Act) is one of several pieces of legislation that was introduced to regulate the conduct of those who have offended against children.

The Act enables police to act, through an offender prohibition order (OPO) to prevent previous offenders from engaging in behaviour that could be seen as a precursor to a new offence.

The CCC reviewed how police and the courts had used offender prohibition orders in the first five years of operation of the Act, identified factors that are currently inhibiting its use, and recommended legislative and policy changes to address these.

This report was tabled in Parliament on 19 December 2014.

The CMC/CCC will review how relevant sexual offenders living in the community are managed, examining the use of provisions under the CPOPO Act as well as other options that can be used to manage concerning conduct. The consultation paper provides information about the CPOPO Act, the key issues to be examined and information on how to make a submission.

The Crime and Corruption Commission (CCC) has made 17 recommendations aimed at improving the way offender prohibition orders are used ...