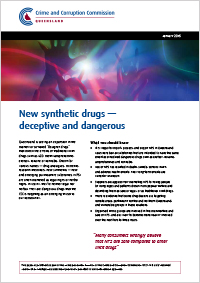 Queensland is seeing an expansion in the market for so-called “designer drugs” that mimic the effects of traditional illicit drugs such as LSD, methylamphetamine, ecstasy, cocaine or cannabis. Known by various names — drug analogues, mimetics, research chemicals, new synthetics — new and emerging psychoactive substances (NPS) are often marketed as legal highs or herbal highs. In reality, they’re neither legal nor herbal. They are dangerous drugs that the CCC is targeting as an emerging threat to our community

This paper is published as part of the crime prevention function of the CCC. It is intended to raise community awareness about the risks associated with using illicit drugs and the growing role of organised crime in producing and supplying these substances.